1. BODY-FACE-IDENTITY
Whilst my previous video installation performance I had a good soul (fragments of a mutilated story) dealt with the notion of the double, presenting the live body and its video recording, the project 2000 pieces / Singular Infinity attempts a poetic reflection on the concepts of alterity and identity taking the visage as philosophical and poetic category.

For this purpose a wide arch was drawn spanning from a classical worldview (the face as mirror of the soul reaffirming the unity between being and appearing); through the first physiognomists’ treatises -such as Johann Kaspar Lavater or GC Lichtenberg- for whom the face is a text, an encrypted code of signs, more or less readable, pure expression open to the observer’s interpretation and understanding; to reach the work of Jewish philosopher Emmanuel Lévinas, who makes the visage the core concept of a theory on the sense of ethics -a meaning given by the face of the other-, where he states: ‘The face is that what cannot be killed or, at least, that whose meaning resides in expressing: “Thou shalt not kill”.’
The notion of visage links us to identity, whether related to our own face or the face of others. And being identity, largely, not something we choose but rather handed by fate, like the name, we get a family inherited face.
The list of artists who reflected on the concept of visage is vast (Francis Bacon, Cindy Sherman, Andy Warhol, Susy Lake, Hannah Wilke, Francesca Woodman, Ana Mendieta, to name but a few of the most influential to this piece’s development). Their innumerable self-portraits are nothing of mimetic reproductions of a subject, much less do they reinforce any anthropocentric view of the world, rather they conceive it as a tool to convey how identity is a poetic and volatile construction of the imaginary, precisely through that which makes us more visible to others: the face, as much as it is modified and transformed by our actions, desires and expressions.
2. I CORRESPONDS TO A FACE/ I AM A FACE / THE FACE REPRESENTS ME / ACTORS LEND THEIR FACES TO THEIR CHARACTERS.
For the Greek, face and mask share the same term: prosopon.
Prosopon-mask and prosopon-face are the same: what is presented to the others’ sight, what is visible versus the covered body parts.

Face, mask, role, character, person. As we consider their etymological background, all these concepts appear entwined.
It is common to say actors lend their faces to the characters they embody… Both onstage and in film, the performer’s face is double, for simultaneously representing them and another.
Likewise, this piece inquires: How is it possible to fit all that fiction the acting craft expose us to into that small-scaled map, already saturated by our own changing heterogeneous self? How do we respond to the demands of representation with just one face? How many faces or face representations are we made of?
In 1978, Paul Ekman and W. Friesen published the first “face atlas”, the Emotional Facial Action Coding System (EMFACS), which enabled to measure, for the first time and with scientific accuracy, all face muscular movements, and to classify the physical expression of emotions.

This method allowed them to prove that humans have more facial muscles than any other animal on earth: twenty-two per side. And that, through the combinatory possibilities of these 44 muscles, we are capable to produce the formidable amount of over 10,000 facial expressions, which means we convey our congeners information of extraordinary diversity and expressive subtlety.
3. SINGULAR INFINITY
According to levinasian conception, the visage is an epiphany, a visitation and, above all, it expresses itself and it means. And this meaning priorly exceeds all the visual forms that overlay it like a mask of its presence in perception. What lies beneath is ‘the ultimate exposure, defenselessness, vulnerability itself’.
Our face is exposed to others, it is for others, as much as the others’ faces are for us, Lévinas says. And the encounter with the other’s face comes to us as a commotion, morally awakening us -since it pulls us out of our sameness-. For this, we must stand before the other’s ‘naked’ face. Regardless of who its holder might be, or what their name is.
This piece is brought together by the hypothesis that the face turns itself in and conceals itself, it is inherited and self-created, it is accomplished and built up, folded into masks that typify it, regulate it, fictionalize it…
But above all, this piece conceives the face as unique, untranslatable, boundless. Like the singular infinity of the other, of any/all other.
The large number of parts that composes it ensembles like a jigsaw puzzle, delicately and precisely. Yet, its secret is never revealed. It remains a blank page over which we keep on writing one of the most complex eloquent texts, as Lavater would say, of the great book of nature, of the divine alphabet. Face is always unique, singular, untranslatable, boundless. What philosopher Emmanuel Lévinas’* calls ethics of the face, brings this reminder to the foreground, stressing out what is valuable, dignified and sacred in each human being: the singular infinity of the other, of any/all other.

Video installation description:
The video installation “2000 pieces / Singular Infinite” consists of a video portrait projection of the artist shot in 4K, then stepped down to iPhone resolution. Different framings range from extreme close-ups to progressive details that convey a broad and diverse gesture activity.
A soundscape of organic texture flows along the projected images.
The device on which the video portrait is projected consists of a large panel-screen that covers the entire surface of one of the exhibition space walls.
In spatial terms, the set is completed by a structure-furniture piece centrally placed, holding a board for the assembling of a 2000-piece jigsaw puzzle.
Another relevant element is a surveillance device, consisting of a bird’s eye framed camera on the board where puzzle pieces spread, feeding a monitor also placed within the space.
In real-time, this camera captures and projects the action viewers are invited to perform while visiting the exhibition: to help solving the puzzle, if they wish to.
Presence and action of viewers permanently introduce new progress to this installation’s object system (video, audio, surveillance cam, images of puzzle-in-progress, etc.).
The performance is conceived as opening event of the video installation. It involves the permanent presence of the artist for the entire time during venue opening hours, for one whole day, performing a series of actions mainly consisting in alternating Lévinas’ live text reading and solving the jigsaw puzzle. 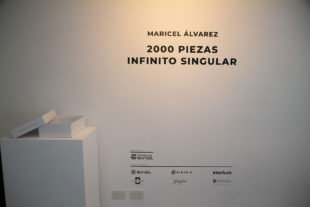 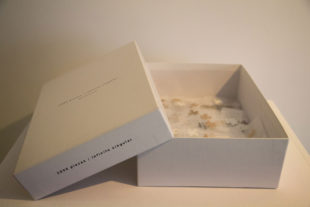 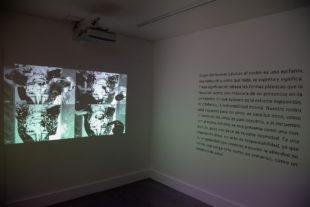 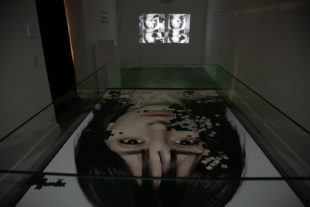 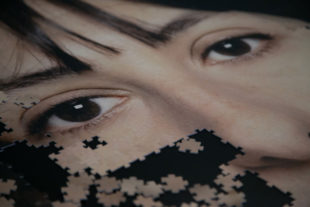 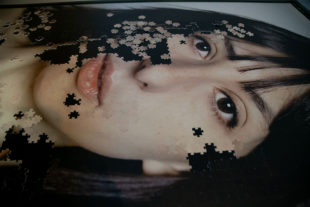 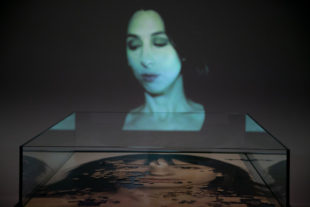 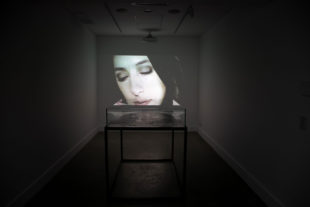 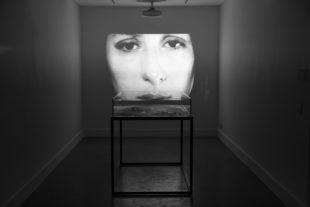 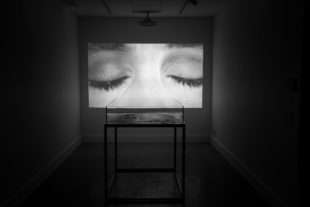 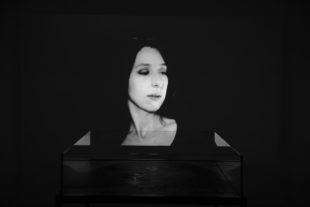 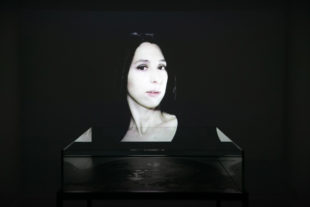 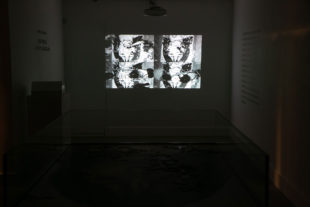 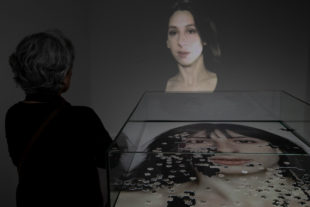 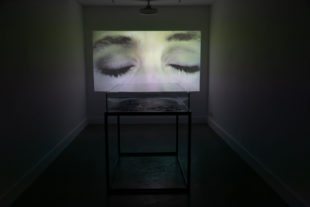