Take care of yourself. A view from a male perspective
A series of performances on Prenez soin de vous by SOPHIE CALLE
Curated and directed by MARICEL ALVAREZ

In an exercise on the limits between reality and fiction, Sophie Calle asked Paul Auster to include her in his novel Leviathan, as the character Maria; she would later continue to develope the main features of that woman imagined by Auster on her own work. Maricel Alvarez operates on a similar level with the French artist herself. It is not the first time she asks her to work on an extension, a sort of epilogue or addendum to one of her projects. Let us not forget that in 2008, she developed a theatre play with García Wehbi using the title of one of her most heartbreaking works, Exquisite Pain. This set the stage for the actress, artistic and theatre director to establish a professional and personal relationship, which resulted in a new interpretative experiment and a new extension: Una mirada desde lo masculino (A view from a Male Perspective), a series of performances based on Take care of yourself by Sophie Calle, within the perfect context of the 2015 Bienal de Performance.

Before it was Exquisite Pain; now Maricel Alvarez uses one of Calle’s most important and renowned works, which premiered in 2007 at the French Pavillion of the Venice Biennale. This piece, presented in full in Buenos Aires for the thirty-third time in its seven years of life, is based on a breakup letter written by Sophie’s lover at the time. Without fully understanding its ambiguous meaning, she gives it to some friends so they can interpret what he really meant with it. The different readings and translations immediately trigger the idea of a large artistic project by Calle, somewhere between exorcism and conceptualization of what a breakup entails, as well as the interpretation or translation of it by 107 different women. All of them have professions that have to do with interpretation or translation, and revisit the meaning of the letter. The result is an astonishing installation that individualizes names and professions, portraits of readers and different and diverse interpretations.

And where Calle’s work ends, Maricel Alvarez takes it one step further -as the French artist has done in the past. Alvarez wonders: how would reading and translations work from a male perspective? Which would be the interpretative triggers and the conditioning factors of these re-readings? The challenge was clear: for the performance, she invited seven men of the Buenos Aires scene, including comedians, dancers, psychoanalysts, poets, playwrights, actors: Emilio García Wehbi, Gustavo Lesgart, Hugo Mujica, Marcelo Delgado, Marcelo Percia, Diego Velázquez and Edgardo Cozarinsky.

One thing was clear, as staged by Sophie Calle herself on the day of the premiere: “This is Maricel’s work, not mine”. The result was brilliant, tender, sometimes funny and others enigmatic, as any of the female interpretations. Maybe because artistic universes are always parallel universes, although they are only based on the ephemeral idea of one acting for a specific audience on a particular day, within a specific framework. 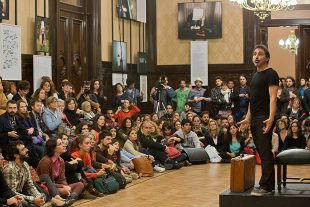 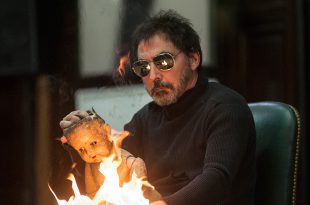 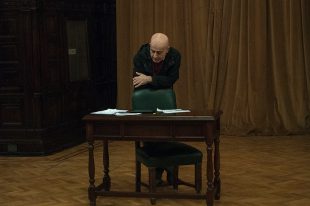 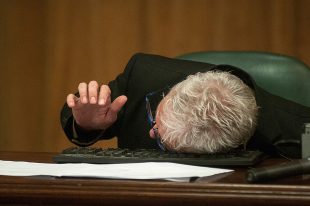 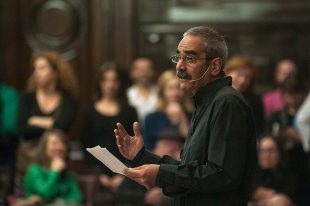 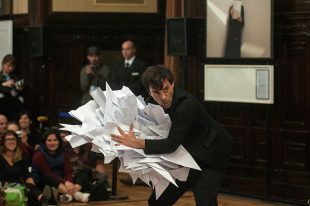 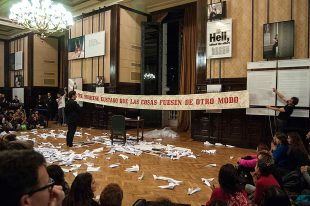 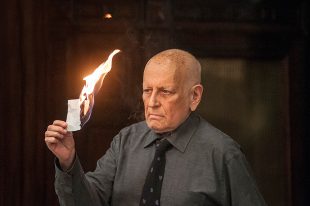 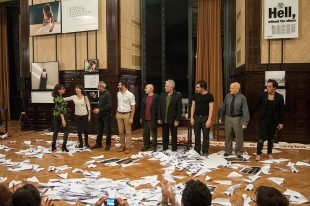 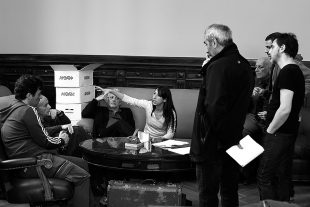 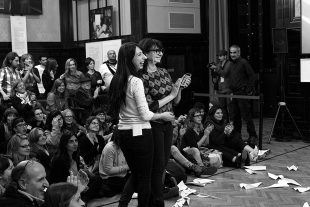 Sophie Calle’s exhibition Take care of yourself (Prenez soin de vous), is an installation made up of nearly a hundred interpretations by women, inspired by an email received by the artist years ago, in which her partner at the time ended their romantic relationship. Within this framework, Maricel Álvarez premiered a series of performances which propose a radical change of analytical perspective by focussing on the male standpoint.

What would men think of the possible reasons that have triggered the writing of this breakup email? In search of answers, the actress and director invited different Argentine artists and intellectuals to present their own conclusions from their fields of expertise.

The series, curated by Álvarez, proposes the subjective reading of the same material and is an invitation to reflect upon the influence of gender in the configuration of a point of view.